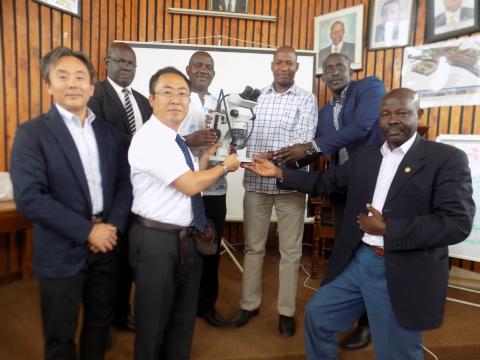 A three year Japan International Cooperation Agency (JICA) project that injected 500,000 US dollars in Mbarara district on safe milk promotion through concentrating on sensitizing farmers on hygiene, nutrition and tick-borne disease control, has come to an end with a call to government to encourage school milk feeding program for milk to gain better price.

‘Agency designed a number of interventions of packages through the Japanese Government to boost milk production in Uganda.’ Dr.  Kohei Makita Professor of Veterinary Epidemiology at Rakuno Gakuen University in Japan made the remarks while addressing livestock farmers and district leaders in a meeting held at Mbarara district council hall on August 9, 2019.

Dr.  Kohei said in the three years implementation of the project the Japanese staff together with the extension workers in the district helped farmers on how to construct cattle crushes and make hay to produce clean and safe milk with concluded end line survey that reduced mastitis and
East Coast fever which used to affect milk production leading to increased milk production.

Farmers who excelled in demonstration were awarded prizes. These included Kabakyenga farm -the best for nutrition and reproduction, Nuwagira Geoffrey farm of Rwenjeru Biharwe division got prize for hygiene and the Consortium farm was best in tick control.

Mbarara District Veterinary Officer  Dr. William Mwebembezi  said by the closing of the safe milk promotion project that was facilitated by the Japan International Cooperation Agency Mbarara district including Rwampara District livestock farmers are producing a total of 580,000 liters of milk daily from the previous of about 410,000 litres.
He said for nutrition pastures seeds were provided under National Agriculture Advisory Services (NAADS) through Operation Wealth Creation (OWC) where farmers only need to adapt the introduced technologies to sustain the projected increase of milk production.

Dr Mwebembezi further said that the factories involved in processing technologies consume only 30 percent, then 10 percent remains in homes that produce the milk and the remaining percentage ends in informal trade of milk vendors and hotels. The farmers in the meeting asked the government and development partners in milk industry to determine milk price on good quality milk as an incentive to encourage the farmer continue producing good quality milk by getting better price compared to a farmer who is not producing good quality milk.

In his address the Mbarara district chairperson Capt JB Bamuturaki Tumusiime called upon the training institutions in veterinary services to emphasize field based training to have sustainable good quality in
milk production.

He also appreciated JICA for supporting farmers together with Dr. William Mwebembezi who worked closely with JICA and Safe milk promotion Mbarara project in Uganda for enlightening dairy farmers on safe milk production.
Capt. Tumusiime urged JICA management to keep monitoring the progress of the project via Information Technology and Japanese embassy in Uganda for sustainability.

Closing the meeting the Deputy Resident District Commissioner Mbarara Mr. Emmy Turyabagyenyi Kateera encouraged the field veterinary extension workers to effectively utilize the funds released to them through their respective lower local government to be close to farmers to take daily data of performance to help the farmers maintain quality production for the continuity of the project.

Dr. Joseph Byaruhanga who had been working as project consultant in Safe Milk Promotion in Mbarara project said even if the project has closed there are some things still affecting farmers especially on
price of milk where government and farmers need to answer the paradox of where a litre of milk is costing less than half litre of water.
He said there is still an uphill task for the government to look into this by promoting better price for those who produce good quality milk at the milk collecting center than that farmer who does nothing but to bring poor quality milk.